Strange the Dreamer by Laini Taylor (2017)

​Lazlo Strange is earnest in his quest for knowledge. He's someone who could be your best friend. Even his enemies can't completely hate him; they just don't understand him.

The story begins when he's young, when suddenly the name of a city he's read about disappears forever. Books, spoken tales, even memories weren't safe. It no longer has a name. It's just...gone. Lazlo is convinced something happened and is determined to learn everything about this city, and somehow, travel to it. Cooped up in the library, assisting researchers going to-and-fro, it seems that day may never come—but he believes. He never stops dreaming, until a day he may finally have a chance to see this nameless city for himself.

And what he finds there is unbelievable.

Filled with adventure, exciting new locations and love, Strange the Dreamer will entrance you with its beauty and otherworldly feel. In Laini Taylor's epic fantasy, Lazlo's strange journey will not disappoint.

The Silent Patient by Alex Michaelides (2019)

Wow! I just finished The Silent Patient, and my mind is reeling. I did not see the end coming at all. It's an amazing psychological thriller that takes you into the mind of, not only the title character, but also that of the psychotherapist. The narrator is Theo, a psychotherapist determined to get Alicia to speak. Alicia is a patient locked up in a psychiatric​ facility who hasn't spoken in about six years, ever since she was accused of murdering her husband. The multi-layered storyline involves well-drawn, complex characters and intriguing twists and turns. A must-read page-turner for any psychological thriller fan! This is Alex Michaelides' first novel. I certainly hope it's not his last.
Tags:
suspense/thriller fiction
Tweet

The Glovemaker by Ann Weisgarber (2019)

​In the 1880s, Deborah lives an unusual life in a small town in the Utah territory. Her husband Samuel, who travels as a wheelwright repairperson, is long overdue. She is part of a community of eight families who live apart from other Mormons because they do not carry the same beliefs.

When a stranger arrives on her doorstep looking for shelter from a federal marshal, it sets in motion a series of events that threatens not only her future, but that of her entire town. Fear and mistrust feature prominently among the community and of outsiders. The Glovemaker provides an interesting look at early pioneers, Mormon settlers, and survival in the 19th century.

Try this Ann Weisgarber novel if you enjoyed News of the World by Paulette Jiles. Both compelling, descriptive novels feature the early West and people overcoming challenging circumstances.

​Renee Ballard, first introduced in Michael Connelly's Late Show, joins forces with longtime detective Harry Bosch to work on the unsolved murder of a 15-year-old runaway girl on the sad streets of Los Angeles. The two officers from different police forces work on the case only when their other duties allow.

Renee is surprised to find the mother of the murdered girl living in Harry's home. Then the mother disappears, adding to the mysteries the officers want to solve. Harry's regular duties crash down on him and he is suspended and then kidnapped.

Where the Crawdads Sing by Delia Owens (2019)

One of my favorite books of the past year: the writing is beautiful; the characters are superbly drawn; the storyline takes you on a roller coaster ride of emotions; and the atmospheric descriptions of nature and wildlife in the marsh, as well as Kya's interactions with them, are extraordinary.

The main character, Kya, known as "Marsh Girl" to the townspeople, is haunting and unforgettable. Her life story is relayed from age 5 through her twenties, as she grows up alone in a shack in the marsh after being abandoned by her family at age 8. Her strength, courage, intelligence, and resiliency are captivating. The mystery of the young man found dead at the bottom of a tower in the nearby town provides an additional element of intrigue.

It's impossible to capture the true essence of this amazing story in a review. You must read Where the Crawdads Sing to understand. I can't wait to read more books by Delia Owens!

Nina dreams of flying to escape her dreary life. When Germany invades the Soviet Union, she joins the Night Witches, an all-female night bomber squadron that wreaks havoc on the German invasion. When she is stranded behind enemy lines, she becomes the prey of the Nazi murderer known as the Huntress. She survives because of her bravery and fierce cunning.

A correspondent during WWII, Ian Graham becomes a Nazi hunter after the war. The target that has eluded him is the Huntress. He joins forces with bold, brazen Nina to track her down.

17-year-old Jordan McBride wants to be a photographer and leave Boston to travel the world. She is happy when her widowed father meets a woman, but something about his soft-spoken German fiancé bothers her. As Jordan becomes closer to her stepmother, the search for the Huntress intensifies.

This compelling story of a Russian pilot, a Nazi hunter, and a young Bostonian woman leaves the reader completely spellbound, hoping for good to triumph over evil. The Huntress is an exciting, suspenseful tale that is hard to put down. It is Kate Quinn's sophomore novel, following The Alice Network.

For more WWII fiction, check out our lists of Novels of World War II and Women in the Resistance.

Marianne and Connell begin a secret relationship when they are seniors in high school. Connell is popular and outgoing, but at times feels insecure since his mother, Lorraine, cleans houses for a living. Marianne, meanwhile, is wealthy, and a loner in part because of her abusive family background. Normal People recounts their relationship over the next four years as they go to college and decide what to do with their lives. It a story of two people finding their way to adulthood and the strong bond they develop with each other. Sally Rooney's latest novel is a great pick for book clubs.

This uplifting novel got me out of my reading slump! The Flatshare features a perfect blend of delightfully quirky humor and lovable characters. The story is told from the alternating perspectives of Leon and Tiffy, who share an apartment but haven't met (Leon works overnight and is home from 9am to 6pm; Tiffy has an opposite schedule). The pair begin a correspondence via post-it notes and slowly are drawn into each other's lives.

Beth O'Leary's charming debut is my favorite read of 2019. It's perfect for fans of romantic comedies, Sophie Kinsella, Eleanor Oliphant is Completely Fine by Gail Honeyman, and One Plus One by Jojo Moyes.

No sophomore slump here! Following The Kiss Quotient, Helen Hoang delivers another sparkling gem of a romance. Khai is autistic, doesn't think he can love, and avoids relationships. So his mom returns to Vietnam and finds Esme: a hardworking single mother with a limited education and fewer opportunities. I loved watching this nuanced pair grow as individuals and as a couple--and learning about Vietnamese culture. The Bride Test presents a modern twist on the arranged marriage trope. ​

Artist Henrietta "Hen" Mazur is convinced her next-door neighbor Matthew Dolamore is a killer. While at Matthew's home for dinner one night, Hen sees a fencing trophy that she believes belonged to murder victim Dustin Miller, who lived down the street from Hen when she lived in Cambridge. Hen isn't sure what to do because she has bipolar disorder and is doing well now, but while in college she had an episode and was arrested for attacking another student because Hen believed the student was a murderer. Hen feels the police won't believe her now, but when Hen begins to follow Matthew, she becomes a witness to his violence and her and Matthew's lives become forever intertwined.

I always look forward to a new Peter Swanson novel and this one doesn't disappoint. Before She Knew Him is a page-turner in the style of Alfred Hitchcock.

Four friends – Amy, Ellie, Marion, Liz – have created a club to help "critters" such as pigs, puppies, mice, chickens, and cats. Amy's mother, a veterinarian, is instrumental in helping the girls with their adventures at the Animal Rescue Center in Santa Vista.

Each book features one of the four friends but all four girls are in each book. The Critter Club has problems to solve and they always find a good solution. In Amy on Park Patrol, the girls work to keep the town park for animals—not more stores. The girls help find a home for Plum the Pig in Ellie and the Good-Luck Pig. The girls start a pet sitting service – Critter Sitters – in Liz Learns a Lesson.

This is a great series for a reader who loves helping animals! Each book in the series of 18 books (so far!) is about 120 pages with black and white illustrations on most pages (book 1 is Amy and the Missing Puppy). Sparkles on some of the paperback covers add to the charm of the stories. The Lexile scores range from 460-630.

Stephen King takes us back to the fictional town of Castle Rock in his latest novella, Elevation, where we are introduced to Scott Carey, a good-hearted, hard-working man, who, as is the case in all of King's works, discovers something rather unusual is happening.

What's most disturbing to Scott is that the unusual thing is happening to him. He's losing weight at a rapidly increasing rate, yet his size doesn't change, ever. No matter how Scott tries to weigh himself down, the number on the scale continues to decrease. As Scott's journey toward weightlessness progresses, the lightness he feels helps him see things more clearly, which inspires the town to go through a kind of lightening as well.

Mary Russell and Sherlock Holmes travel to Fascist-controlled Venice to find a patient (Lady Beaconsfield) missing from the Hospital of St. Mary of Bethlehem (Bedlam). Mary finds it to be a great lark mingling with the idle rich on Lido beach while Sherlock takes a more serious slant to their search and considers the finer points to their investigation. Yet Mary prevails as Lady Beaconsfield and her nurse attendant also enjoy La Doce Vita and often venture from their island hideaway to join the gang at Lido. Mary concocts a clever scheme to rescue Lady B from her Fascist older brother who is more interested in the Lady's inheritance than her welfare.

Follow the latest adventure of this pair in Island of the Mad by Laurie R. King (and to see where it all starts, check out my review earlier this month of The Beekeeper's Apprentice).

Another smart sports romance from newcomer Alexa Martin. This second chance romance is filled with sparkling wit and vivid characters (along with serious discussions of brain injuries in football). Fumbled is engaging and memorable. For fans of Susan Elizabeth Phillips, Jasmine Guillory, and Rachel Gibson. 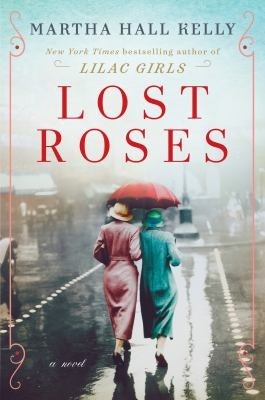 Martha Hall Kelly's newest novel, Lost Roses, focuses on Eliza, the mother of Caroline Ferriday (who you may remember from Lilac Girls). Kelly brings to life the story of Eliza traveling to St. Petersburg with Sofya Streshnayna, a cousin of the Romanovs. The two met years before and Eliza is excited to see Sofya's home, but Austria declares war on Russia and the Imperial dynasty starts to fall. Eliza escapes back to America while Sofya and her family flee to their country estate, putting themselves in mortal danger. Eliza tries to assist fleeing white Russian families to resettle, but fears the worst when she stops hearing from Sofya.

Lost Roses is a beautiful, well-researched tale of women's strength and friendships and surviving perilous times. Excellent choice for fans of historical fiction.