Crime Story ran two seasons in the mid-1980s, but was set in the early sixties in Chicago, where it was filmed. Dennis Farina played tough cop Mike Torello, head of the police's major crimes unit. Each episode had a specific crime to solve, but always there was Torello's ongoing pursuit of gangland punk Ray Luca (played by Tony Denison of The Closer). The early sixties setting is marvelous from the skinny ties, sharkskin suits, brylcreamed hair, and narrow brimmed fedoras to the pre-Beatles pop soundtrack and the snazzy two toned cars.

With its Joe Fridayish opening narration and its film noir stylings and sensibility, the show was a throwback to an earlier time, but the violence and the story arc that lasted across the entire season made Crime Story ahead of its time.

Look for appearances (before they made it big) by David Caruso, Gary Sinise, Kevin Spacey, Julia Roberts, Christian Slater, Stanley Tucci, and many others.
Tags:
drama tv show DebbieW
Tweet

Imagine Game of Thrones but with Vikings. Action, political intrigue, and betrayals only begins to describe it. Simply put...it's amazing.

Viking farmer Ragnar Lothbrok dreams of sailing west to discover new lands, but timid and conservative Earl Haraldson refuses to consider his request. Ignoring his commands, Ragnar sets sail and opens the West to Viking raids and starts off a power struggle between him and his earl.

Check out both seasons 1 and 2 of Vikings from the library today. Visit History.com for a behind the scenes look at the show, including videos, pictures, and blogs.
Tags:
adventure historical tv show
Tweet

A Baltimore squad room in the 1990s was the setting for this gritty urban crime drama. City and police politics and the seen-better-days streets and docks of the city make an involving backdrop for the ongoing cases and personal lives of the homicide detectives.

Passing through the squad room over the seven seasons of Homicide: Life on the Street were Ned Beatty, Daniel Baldwin, Melissa Leo, Andre Braugher, Richard Belzer (in a role he carried over onto Law & Order: Special Victims Unit), and Jon Seda. The bad guys are sometimes caught, sometimes not; all the murders in the city documented on the squad room’s white board: names in black if their murder is solved, in red if not. Always involving, sometimes unsettling, don’t miss it if you appreciate fine writing and character development in your television viewing.

Before there was The Wire, there was Homicide: Life on the Street. Baltimore native director Barry Levinson produced Homicide based on the writings of Baltimore Sun writer David Simon. Simon wrote for Homicide and then went on to write and produce The Wire.
Tags:
drama tv show DebbieW
Tweet

This TV western ran six seasons from 1957 to 1963 and starred Richard Boone as Paladin and Kam Tong as Hey Boy. During its six year run, it was ranked 3 or 4 during its first four seasons. It was during the time that westerns were occupying more than half of the spots in the top ten and top twenty ratings.

But Have Gun Will Travel was different from other westerns. Paladin was a hired gun with an education. He was a sophisticated man who knew his Shakespeare, loved poetry, opera, classical music, art, the theater, history, spoke several languages, seemed to know about all cultures, was well traveled, knew chemistry and physics indeed an Everyman or Renaissance Man.

Although he charged huge sums for his services, he occasionally charged little or even donated his services for a worthy cause. When not working he lived in a posh hotel in San Francisco where he dated beautiful women, drank the finest wines, liquors, and whiskeys and hence he need to charge large fees for his services.

When he was working, he dressed all in black. Although his gun was for hire, he refused jobs that required him to commit murder. He was an expert with his gun, with a rifle, knife or sword, and his fists as well.

He treated people of different cultures, races, or religions with respect and admiration. Although Hey Boy’s name is dismissive and his job as bellboy is humble, Paladin always treats him with the greatest of respect.

The episodes are wonderfully written and are unique and yet some episodes are transposed from classic works of literature. Some of the episodes were written by Gene Roddenberry of Star Trek fame.

Even the closing theme the Ballad of Paladin is wonderful and was appropriately written by a man named Johnny Western.
Tags:
tv show western Bill
Tweet 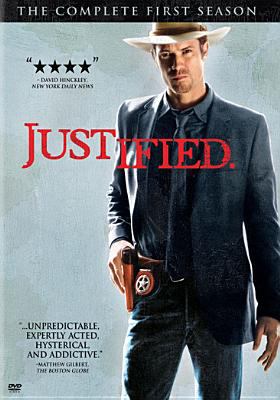 Deputy U.S. Marshal Raylan Givens (Timothy Olyphant) is sent home to Eastern Kentucky after the “justified” shooting of a South American drug dealer in Miami. Givens is a modern day Gary Cooper, tall, lanky, and laconic; and he is always sporting his signature Stetson.

In Harlan County, he has to deal with the crazy Crowder and Bennett clans, current day bootleggers—purveyors of marijuana, crystal meth, and prescription painkillers. And he must do it in a society where toting a gun is an everyday fashion statement.

A combination of historical and fictional characters populate this HBO series. In Deadwood, South Dakota, in the late 1870s, Seth Bullock and his partner Sol Star open a hardware store to sell to Black Hills miners. The

general lawlessness of the town leads Bullock to become sheriff. As sheriff, he must deal with competing houses of ill repute and gambling and the drunkenness of the likes of Calamity Jane. Deadwood is colorful, violent, and contains much strong language.
Tags:
drama tv show DebbieW
Tweet

, a BBC Masterpiece Mystery! and he has nailed it. The grouchy and steadfast Watson is deftly played by Martin Freeman.

This series is Holmes in a non-Victorian setting, but it stays true to the character’s heritage of arrogance and braininess. Although the show is more typical of the contemporary crime drama, the stories are taken from the original Arthur Conan Doyle novels. The writers have entirely modernized them and given them new depth using the wonders of the digital age and a very contemporary London.
Tags:
drama tv show Sally
Tweet

For five brief seasons, this emotionally rewarding television series gave us the trials and triumphs of high school football coach Eric Taylor. Set in a mid-sized town in Texas for which the high school football team’s success is everything, we get to know all the regulars, the coach’s high school guidance counselor wife, the head of the boosters, the football player stars and hopefuls, and the girls that date them. For many of these players, success on the football field means a scholarship and the hope for something more than life in Dixon, Texas.

One of my favorites is Tyra, who is from a family of women who live by finding a man to

take care of them but who wants to go to college and make a change. Sweet Matt gets thrust into the role of QB1. Not the most talented athlete, he uses his brains to take his team to the state finals. And of course Tim Riggins, the bad boy we all had crushes on in high school, a well-intentioned and noble character from the wrong family. And Coach Taylor and his happy marriage to Tami hold the whole series together.

After hearing the nonstop buzz about Homeland, I watched the first season and I was not disappointed. The plot centers on CIA agent Carrie Mathison, who was warned by an Iraqi source that an American prisoner of war had been turned by Al-Qaeda. When Nicholas Brody (Damian Lewis), a U.S. Marine Sergeant, is rescued after being held captive by Al-Qaeda for nearly eight years, Carrie is suspicious. Claire Danes does a tremendous job playing the role of Carrie, who is determined, almost to a fault, to prevent another terrorist attack. This heart-pounding, suspenseful drama will keep you questioning who is really telling the truth.
Tags:
drama suspense tv show
Tweet

The Good Wife is a fascinating legal drama that centers on Alicia Florrick’s (Julianna Margulies) return to her former profession as a litigator after 12 years spent at home raising her children. Her husband is the disgraced Cook County attorney, who is currently incarcerated due to a very public sex and corruption scandal.

The show chronicles Alicia’s struggles as she deals with a new job, her conflicted feelings toward her husband, and the pressure of raising her two children. It is such a smart and well-acted television show and definitely one of my favorites.

The HBO series opens on New Year’s Eve, 1920, the moment Prohibition becomes the law of the land. Local politician Nucky Thompson runs Atlantic City and wants to control all of the liquor coming in off the shore and distributed across the country. The likes of Lucky Luciano, Al Capone, and other real-life gangsters appear in Boardwalk Empire.

The sets, the costumes, and most particularly the soundtrack transport you to the early days of 1920s Atlantic City, where the magnetic Nucky Thompson pulls all the strings. Because the series was first shown on premium cable and portrays gangsters and prostitutes as many of the characters, this show does have graphic violence and nudity.

Vampires have always existed in the shadows of Bon Temps, Louisiana, but with the invention of the artificial blood product “True Blood,” vampires have come out into the open. Some residents welcome them, like heroine Sookie Stackhouse (Anna Paquin), but others need a little persuading.

As so often happens when vampires are around, other supernatural creatures make appearances as well. Be prepared for great characters, violence, gratuitous nudity, goofy humor, and a touching love story in seasons 1 and 2 of True Blood. Seasons 3 and 4 are also available on DVD. Based on the novels by Charlaine Harris.
Tags:
drama fantasy tv show
Tweet

This new dark drama takes getting even to the next level. The show centers on the beautiful Emily Thorne who rents a beach house in the Hamptons for summer. It is revealed through flashbacks that Emily is not there to soak up the sun, but instead to exact revenge for the people responsible for her father’s wrongful imprisonment. Her cold and calculating plan ensures that everyone involved in the plot to frame will suffer, especially the powerful Grayson family. Revenge is a deliciously wicked show that shows how far someone will go for justice.
Tags:
drama tv show
Tweet

Treme, an HBO series by the team behind The Wire, is a detailed portrait of life in New Orleans, weaving together stories of the music, people, traditions, and recovery of the city, post-Katrina.

Season One begins three months after the hurricane when many residents are still unable to return to their destroyed homes, some people are missing and unaccounted for, and those that are home are struggling emotionally and economically with the aftermath. The city’s rich musical traditions are particularly well-represented and the characters whose lives we follow are a fascinating cross-section of society with their devotion to New Orleans and its traditions the common theme.

The Duchess of Duke Street, a BBC production of Edwardian England, is plain old fun to watch. Gemma Jones, who plays the duchess, immediately engages us by her super strong performance of a servant girl who becomes a notorious chef who also catches the eye of the Prince of Wales.

Many times she is a victim of Victorian strictures, but meets these challenges head on with verve and style. The story is offbeat but keeps you thoroughly entertained. After watching season 1, I immediately looked for season 2.
Tags:
drama tv show Lucille
Tweet
First Page Previous Page 1 2 3 4 5 6 Next Page Last Page