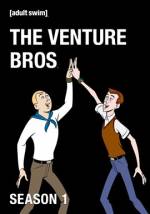 Doctor Venture lives in the shadow of his father's past accomplishments in super science struggling to make new inventions. At the Venture compound with his two sons, Hank and Dean, and his bodyguard Brock, he works on inventions, even selling his father's old ones to shady parties to keep the lights on. His inadequacies are not the only trouble he must worry about: his archnemesis the Monarch, a man in a butterfly costume with a flying cocoon, tries to kill him every week.

Tweet
Tags:
comedy animated tv show
A Night on the Town
The Rainmaker